Not very long ago, one of our co-founders wrote a post on the million-dollar question in the enterprise networking world.  In that post, Ranga discussed how hardware load balancers cannot scale elastically, which is why even web-scale companies such as Facebook and Google leverage software load balancers for elastic autoscaling to match traffic requirements.

In this post, I walk you through the specific metrics your load balancer must monitor for efficient and intelligent autoscaling.  The decision to scale-out or scale-in applications should be made based on the application’s performance, available resources, and saturation in underlying cloud infrastructure.  App scale-out is desired when there is degradation in service quality, available resources, an increase in errors, and in application load.  Conversely, apps must be scaled-in when it is over-provisioned.

The following metrics represent a cloud application’s performance and capacity:

In addition to the standard resource metrics mentioned above, Avi’s Service Engines have additional resources that are used to make intelligent and real-time decisions to scale-out and scale-in. Here is a quick summary of those metrics:

The following sections provide a framework to choose different autoscale metrics for cloud application by identifying application’s performance and resource traits. Admins can match their application to one of the traits below and set up autoscaling.

Avi's HealthScore can also be used to decide an application's scale-out as the app health incorporates all the metrics described in the previous section into a single indicative number. Avi’s health score incorporates performance metrics and errors across network and application stacks. It degrades when there is not enough available resources or inconsistent performance. Application health, for an Avi Vantage user, therefore is the simplest way to setup autoscale policy in the absence of a good performance and resource benchmark for that application.

Here is an example of how an Avi admin can configure scale-out and scale-in for an enterprise application that has been benchmarked to support 100 open connections at its peak and has an SLA requirement of <500ms latency.

Now set up the scale-in alert such that performance is within the SLAs and there are plenty of resources.

Select the “scale-out alert” in the list of Alerts to be used for scale-out.

Select the “scale-in alert” in the list of Alerts to be used for scale-in. 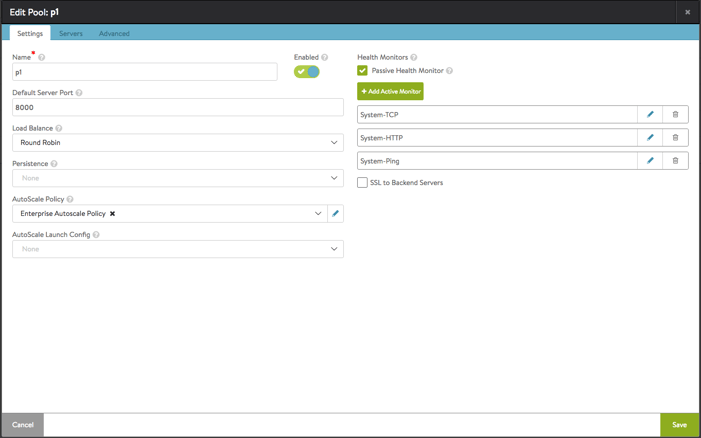 Appendix - Metric IDs for use in AlertConfig and ServerAutoscale Policy APIs