Server Virtualization | The Irreversibility of Progress 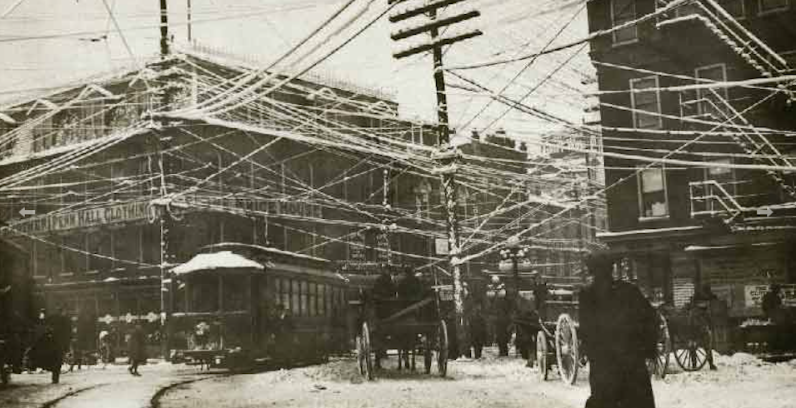 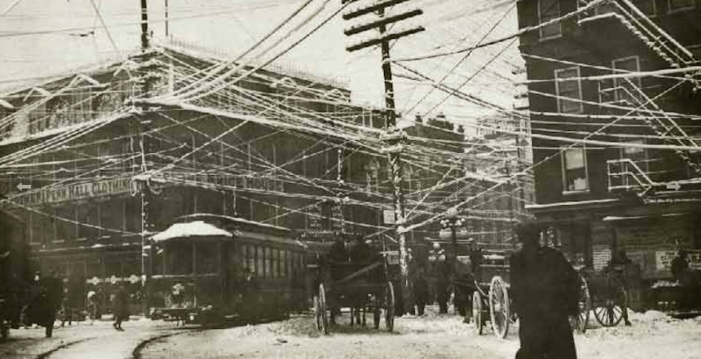 As a resident of New York I am fascinated by the history of this great city. The can-do attitude and swagger of “Gotham” but also the cultural diversity and complexity. As a technologist I am drawn to the mindboggling effort it takes to run an infrastructure necessary to support 8.4 million residents plus 1.5 million daily commuters who travel each day to the city for work. Urban life has always interested me. The photo above is a New York City street corner taken in 1887 only eleven years after Alexander Bell’s first long distance two-way phone call (between Cambridge and Boston). For the next 15 years both electric and telephonic wires would encase the city in an increasingly unorganized, dense web of entanglement. But progress marches forward. Legislation would be passed, money would be raised and the wires were soon moved underground only to be remembered in these old photographs.

Switching gears to information technology I can see a lot of parallels in the advances we have made to modernize our infrastructure. In the early days of server virtualization many clients questioned the performance and whether virtualization could work for production apps. I was fortunate to observe up-close the transformation of our industry as an early employee of a small Palo Alto based company called VMware. It’s funny to think back to the many earnest discussions with serious, thoughtful people about whether server virtualization would work for their environment. Fast forward and virtualization for compute is mainstream. The ease of virtual machine automation and provisioning of x86 server workloads is easy and reliable, huge savings have been extracted through server consolidation and much of today’s cloud computing industry has been enabled through this innovative technology.

Around 2005 we began to see the concept of virtualization extend to new areas. Pioneers like Martin Casado (who co-founded Nicira in 2007) and others began to extend “software defined” principles to the network bringing automation and flexibility of software to legacy hardware-bound architectures. Using a new networking software-layer allowed network admins to easily change, automate and provision Layer 2-3 network services in real-time. Abstraction also extended to storage. Virtualization of storage services from the underlying physical storage systems would become mainstream starting in 2010 and this capability is now widely recognized (and supported) by multiple vendors. Using storage virtualization software, a client can take multiple independent storage components, even if these are distributed across a network, and manage them as a single storage device.

As I reflect on my career in technology it’s awe inspiring to think about the dramatic advances we have seen in the last 10 years. Together we have witnessed the birth of the iPhone (June 2007); the dramatic explosion of mobile communication and consumer apps (there are now 2.6 Billion smart-phones); and soon we will see autonomous transportation (currently 19 companies are racing to put self-driving cars on the market by 2021). IoT is really happening and IDC predicts that by 2025 more than 80 Billion devices will connect to the internet. Within Data Center infrastructure, the flexibility provided by software, virtualization and abstraction has forever changed the way we build and design data centers. These principles are now irreversible.

Just as we won’t go back to the age before smart devices, we also won’t go back to a time where we design data centers without software defined principles. Today’s modern world is too efficient, too elastic and too on-demand to retreat to a legacy design of hard-wired, inflexible, under-utilized assets.

This brings us to the present and the extension of “software-defined” benefits to Layer 4-7. In late 2012 Avi Networks founding team members including Murali Basavaiah, Ranga Rajagopalan and Guru Chahal began to apply proven software defined principles to Application Delivery. Similar to the disruption of server, network and storage industries, wouldn’t things be easier if load balancing (and other application delivery services) could be instantly provisioned anywhere, distributed, scaled and managed as an elastic fabric? Wouldn’t it be helpful for enterprises if we extended the same ease of deployment, elastic-scale, and automation experienced today with compute, network and storage virtualization to application services such as load balancing? How about real-time granular data analytics of our applications, round-trip-time, and network performance in an easily searchable dashboard. Can this important data be extracted without using cumbersome legacy data capture techniques? It is with these goals that Avi Networks was born.

Today our modern software-defined architecture allows Avi to instantly automate and provision services, while elastically scaling at speed. Beyond elastic load balancing, our segregated data plane allows for amazingly detailed analytics captured in granular amounts in a way that does not sacrifice performance.  When you build a solution using modern, software-defined principles you can deliver value faster. Our clients today save 70% on TCO, have 5X faster application rollouts, improved security and resolve network trouble tickets an average of 4 hours faster. In addition, the platform provides automation, elastic-flexibility and scale across a variety of environments including commodity x86 hardware, VMs, containers or public cloud.

What an exciting time to be alive. We are stepping into the future. The security, responsiveness and performance requirements of today’s applications continues to increase and our ability to adapt to these requirements pushes us forward. I am energized about the modern, software-defined capabilities we deliver and more importantly, the business outcomes realized by our clients.

We continue to march onward...after all Progress is Irreversible.